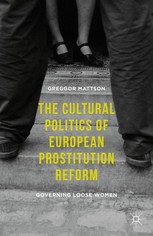 This is an intriguing study of prostitution law reform in four European countries, set in the context of increasing European integration in the period of the adoption of the Euro and the enlargement of the EU towards the East. This process triggered anxieties about the fear of losing sovereignty of the national state and national cultural values, coinciding with the first prostitution law reforms in EU states. This leads to Greggor Mattson’s central tenet that prostitutes ‘came to symbolize the ability of nations to preserve their values and police their borders, and the efficacy of transnational politics to solve global problems’ (p. 2). It sets the period under study from starting in 1999 and ending around 2007, although he is not very specific about the end date. To achieve his major objective, Mattson selected the first four EU states to reform their laws in the period of what he calls the ‘new prostitution politics’, contrasting it to the reform period around 1900, making use of time lines of the various reforms to argue his case.

The first two selected are the Netherlands and Sweden who reformed in opposite directions in 1999, the former legalizing prostitution and the latter turning to abolitionism with the criminalization of the client. In 2001 Germany also legalized prostitution, but in a more moderate form, which had little effect on sex workers due to ‘bureaucratic failure’ (p. 125). In 2006 Finland enacted client criminalization, but only in cases of human trafficking, displaying, in Mattson’s words, a ‘half-hearted abolitionism’ (p. 151).

Mattson shows that the very different outcomes cannot be explained by national-cultural differences alone and therefore poses the central question why four quite similar Northern European countries – ruled by left wing parties - enacted such different laws in such a short period (p. 10). (In the Dutch case not quite so: the cabinet was a left/right coalition). The empirical basis of the study is provided by careful reading of primary and secondary sources, and a series of fascinating in-depth interviews with stakeholders in the issue, such as NGOs, local and national bureaucratic units dealing with prostitution, and some experts. The interviews are used to explore respondents’  interpretations of the cultural and national aspects of prostitution reform,  yielding some  striking insights into the  framings of the issue and the wide gap separating pro-legalization protagonists and abolitionists. It should be noted that it is unclear when the interviews were held exactly.

Guided by Weber’s concept of rationalization, Mattson regards prostitution reform as the rationalization of sexuality, while noting that at the same time sexuality is also seen as the most personal sphere of people. The social construction of prostitution generally reveals people’s notions of a good society and hopes for the future (p. 13); prostitutes come to figure as citizens in these reforms, as part of an expanding nation state project. Dominating the debates in Europe is the problem whether prostitutes are vulnerable women in need of protection or sex workers in need of rights. Mattson draws out an important point that the majority of prostitutes/sex workers are not national or even EU citizens, but denizens who cannot profit from the newly conferred rights. Mattson shows how the EU’s dealing with prostitution and human trafficking leads to ambiguous outcomes. However, he should have stressed the crucial point that human trafficking falls within the EU’s remit, while  it has no competences in prostitution. He ascribes the ambiguous outcomes to the failure of building a supranational ‘third pillar’ to deal with migration and security, but it is precisely the fears about the erosion of national sovereignty which caused the failure.

Mattson’s answer to his riddle lies in the different welfare state regimes of the countries studied. The Netherlands and Germany are both corporatist welfare states, in which the incorporation of citizens is through their work status. Sweden and Finland are Scandinavian social democratic welfare states. Gender egalitarianism was central to mobilizing their scarce labor capacity; helping mothers to work was essential and the protection of their autonomy was key to the success of Scandinavian state projects. He convincingly shows that the reforms in each country were consistent with its general ‘cultural repertoires’ (p. 158), but also with the basic principles of its welfare state. These in turn shape citizens’ understandings of social problems and their expectations of the welfare state as well as how they regard themselves (p. 157).

The study has a few flaws. Mattson distinguishes the current period of reform, the ‘new politics of prostitution’ ( p. 5-7) from its 1900 predecessor era, but the historical evidence points less to a categorical difference than to a difference of degree. This reader wished that he also examined the post 2007 period, where more policy convergence at the EU level and among member states occurs, and how he would have accounted for these policy changes. He holds that prostitution was not a state concern prior to the period under study when it became ‘the key defense of national morals from external threats’ (p.11), This is arguably wrong, given a very long tradition of state interference in public morals. There are also some mistakes and omissions, such as in the timeline of the Netherlands, which misses the formative debates on reform in the 1980s and posits amendments in 2002 which did not occur, The importance of the federal structure of Germany in accounting for ‘bureaucratic failure’ is also ignored.

Nevertheless Mattson’s study is an absorbing and welcome contribution to prostitution policy analysis by its focus on the national cultural context of reform, the importance of the local for the (lack of) implantation of national policy goals, and its sociological imagination. And it is truly innovative in establishing the link between welfare state type and type of reform, and exploring how stakeholders understand the issues at stake.