Rethinking the Union of Europe Post-crisis: Has Integration Gone Too Far? 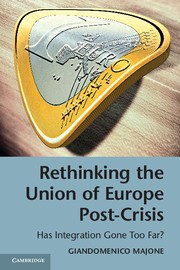 A great many Europeans, including Giandomenico Majone’s fellow Italians, might well raise some eyebrows when reading the title of his latest book. They would argue, as this reviewer does, that the use of the words ‘post-crisis’ would seem rather optimistic. As this review is being written, the Far-Left Greek government, overwhelmingly elected in January 2015, has closed the country’s banks for a week and imposed capital controls after talks between Athens and her creditors ended without agreement. The odds of a Greek exit from the Euro have narrowed considerably. Yet, aside from the title, once you delve into the book, what you discover is an excellent, refreshingly realist account of the process of European integration.

Heavily reflective on the ways in which the process was constructed, the focus of the book is largely on Economic and Monetary Union (EMU) and the creation of the single currency, the Euro. Divided into ten chapters, the book weaves an insightful narrative that touches upon other policy domains including regional policy, the common agricultural policy (CAP), competition and common foreign and security policy (CFSP). Majone’s argument is clear: EMU was a good idea but one that was ill conceived and remains highly problematic, if not wholly unworkable. The devil was in the detail of its construction but the politics of integration triumphed over the sane economic arguments cautioning against creating an economic union with a political counterpart or counterweight. So far as the other policies are concerned, the CAP, far from being a benign welfare policy for the EU’s farmers, has become a cash cow from big landowners. The ‘common’ in CFSP is mostly misleading. Overall, the book exposes the very real challenges of pursuing further integration, driven largely by elites, within a union of 28 politically and socio-economically diverse member states.

Yet, such reflective revelations are hardly new and the sovereign debt crisis that erupted in 2008 simply served to prove what some scholars, as Majone makes clear, had argued for years. Many countries should not have joined the single currency, at least not initially. The selection criteria seemed dubious and oversight almost an afterthought. Even when Athens admitted in 2004 that the Greek government had cooked the books simply to gain access to EMU by 1999, no action was taken against that member state the Commission or by the European Council. Part of the problem with the integration process is the absence of a post-enlargement policy. Once countries join, they are treated differently. They break rules but the punishment, usually in the form of fines, is weak.

The book’s analysis though could have gone further; some sections feel rather repetitive. The question posed in the title, ‘has integration gone too far?’ is not satisfactorily answered. Yes, Majone is clear that continuous harmonisation of policies is not the answer (but perhaps the problem) and that healthy competition 2 between member states should be encouraged. Anxiously, the reader is left waiting at the end wanting some clearer conclusions, a more unambiguous roadmap from such a prescient observer of the integration process. Has it gone too far or, perhaps, not far enough? The integration process did not come with a reverse gear; to roll back any policy would be seen, at least in the eyes of the elites, as a failure. Defending, preserving and expanding the acquis communautaire has been the Commission’s raison d'être since 1958. Yet, one of the strengths of this book is how the author tackles and further exposes a herd mentality that has come to dominate policy-making since the late 1950s, not only in Brussels but also in the capitals of some of the member states.

A second issue raised throughout the book is the (non)-relationship between policy and decision-makers and those within the humanities and social sciences. During the early years of the integration process, people like Walter Hallstein, first president of the Commission and himself a former professor, and Jean Monnet, were very much influenced by established academics like Ernst Haas and the neo-functionalist school of thought. In later decades, this seems to have changed and while scholars from many disciplines in many countries on many continents raised questions about the feasibility of creating a monetary union without political union, their voices were largely ignored. When did the political elites stop listening to the academic world? Or, put another way, why did decision-makers, in Brussels and elsewhere, not heed many of the warning issued about EMU during its construction and after?

A third and final point worth stressing is Majone’s analysis of policy harmonisation. A closer examination of this streamlining is not only timely (in light of the sovereign debt crisis) but also necessary especially since the EU has now turned its harmonisation gaze on taxation at national level. He states: ‘Today we know that even excessive harmonization has not been sufficient to ensure the stability of the EU. Indeed, one could argue that excessive harmonization has been the immediate cause of the present instability: monetary union is, after all, an extreme form of total harmonization’ (p. 270). The one-size fits all approach adopted in a broad range of policy fields is deeply flawed for a while host of reasons outlined throughout the book. The diversity between and within the member states is extraordinary and no amount of Brussels red tape is going square that circle.

In conclusion, Majone has produced a must read for the intellectually curious (and critical) students and scholars of the European integration process. Above all, this book should (but probably will not) be read by an audience that needs a strong dose of critical self-reflection, the EU functionaries.