Why Noncompliance? The Politics of Law in the European Union 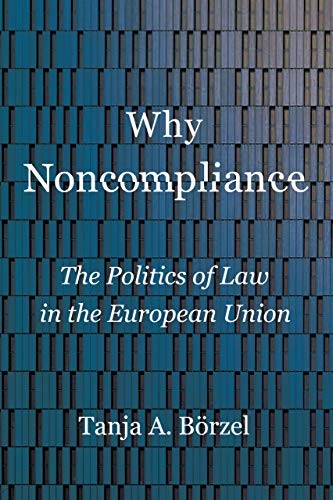 The book begins with the observation that “all member states comply with almost all EU law almost all the time” (3). What appears to be a puzzling motivation for a book on noncompliance is immediately confronted with more recent, more severe challenges. Most member states did not comply with the EU’s scheme to resettle migrants, Euro-states did not comply with stability and growth pact, and the Polish and Hungarian governments are violating the EU’s fundamental values. Consequently, the EU has a limited compliance problem when regulating its internal market, but it faces more severe challenges in other, sensitive areas. By studying rich, longitudinal data on compliance with internal market regulations, we can arrive at valuable insights for the current, severe compliance challenges. In my reading, this has been a key motivation for writing the book; in any case, it is a very good reason for reading it.

Tanja Börzel has been among the first to study compliance with EU law by a systematic and quantitative approach, offering insights from a dataset that covers 40 years of EU law making. The empirical analysis is structured along three puzzles that neatly match three levels of variation. (1) Why do states have different compliance records? Why, for example, do Eurosceptic countries such as Denmark or the UK have better compliance records as Europhiles such as France or Portugal? (2) Why did non-compliance begin to decrease at a time when the amount of legislation began to increase (i.e. the mid 1990s)? (3) Why are some policy sectors, such as Justice & Home Affairs or Environment, more infected by noncompliance than others? These three puzzles provide the structure of the book, with a chapter devoted to answering each puzzle.

Tanja Börzel introduces a model that accounts for power, capacity, and politicization (dubbed the “PCP model”) during the “shaping” and the “taking” stage of EU politics. Overall, the theoretical framework proves useful for the empirical analysis, although distinguishing the three factors of the model can be confusing at times. There are three underlying questions of interest. First, which factors determine governments’ ability to shape EU law? The answer is voting power, administrative capacity, and a Eurosceptic public, which governments may use strategically to extract concessions in EU negotiations (“Schelling conjecture”). Second, which factors determine governments’ ability to avoid complying with EU law they dislike? Again, the answer points to voting power and, possibly, a Eurosceptic public, both factors that make it harder for the Commission to enforce compliance. Third, how capable are governments and their administrations to transpose and implement EU law? Here, the single-most important explanatory factor is bureaucratic capacity.

Whereas influence over EU law and administrative capacity should clearly facilitate compliance, governments’ ability to resist enforcement action is a double-edged sword. On first sight, it makes noncompliance less likely. Yet, on closer inspection, it may re-enforce governments’ power at the shaping stage, thus making compliance more likely. Referring to existing studies, Börzel expects that public opinion (“politicization”) is more relevant at the shaping stage.

On the empirical side, the book makes very good use of the Berlin Infringement Dataset, augmented by recent datasets on EU law. Here, the book provides an excellent introduction to the concepts of transposition, compliance, and infringement as well as the corresponding operationalizations. The empirical analysis itself is structured along three chapters, each offering important answers to the three underlying puzzles.

First, states with higher voting power, less capable bureaucracies, and EU-friendly publics are less compliant with EU law. Interestingly, this finding implies that voting power is irrelevant at the “shaping stage” (when the actual voting takes place) but matters at the “taking stage”, when powerful governments find it easier not to comply with laws they do not like. By contrast (and equally surprising), Euroscepticism is relevant at the shaping stage, giving governments an upper hand in negotiations, but irrelevant at the taking stage (when the public confronts EU policies).

Second, the increasingly higher level of compliance since the mid-90s is driven by an increasing number of less complex, less novel, and less politicized directives. Tanja Börzel argues that amending existing legislation carries lower political costs, and she finds that new directives indeed have a higher risk of non-compliance. Moreover, she finds that Commission directives have a lower risk of noncompliance, concluding that the delegation of powers constitutes a possibility to avoid politicization.

Interestingly, the decision to delegate is considered endogenous to EU policy making. The fear of noncompliance due to politicization is causing delegation, thereby reducing noncompliance. Consequently, Tanja Börzel identifies two defensive strategies to meet the risk of politicization: Either make concessions to a government that faces a Eurosceptic public (chapter 3) or avoid confrontation with the public by delegating powers to a supranational agent (chapter 4).

Third, redistributive policies are more difficult to negotiate, but regulatory policies cause higher challenges for compliance – especially if they are market correcting as, for example, environmental, health, or justice and home affairs. While these are very interesting and relevant findings, the link to the overarching PCP model is not self-explanatory for this part of the analysis; an unfortunate issue that is also apparent when “control variables” are in hindsight used to support the key argument of the PCP model (e.g. the role of national parliament, p. 132).

Overall, the book features an empirically rich and comprehensive study of compliance with EU law. It offers the essence of more than a decade of quantitative and qualitative empirical research by Tanja Börzel. In conclusion, the book has an extremely important message for EU leaders: One of its main findings implies a trade-off between compliance and democratic governance. To avoid politicization and improve compliance, the Commission and member states are tempted to delegate additional powers to the EU – an obviously undemocratic strategy. Ideally, public awareness should re-enforce compliance. A political system in which policies must be hidden to avoid non-compliance is undemocratic and will, in the long run, face public backlash. In fact, proposals for more EU competences in migration and monetary policy caused a public backlash in some EU countries, which may eventually improve the bargaining position of noncompliers, such as the Orban government, in Brussels. On the other hand, where public support is high (as in Poland today), the EU should not shy away from open confrontation with noncompliant governments.