Banking on Markets. The Transformation of Bank-State Ties in Europe 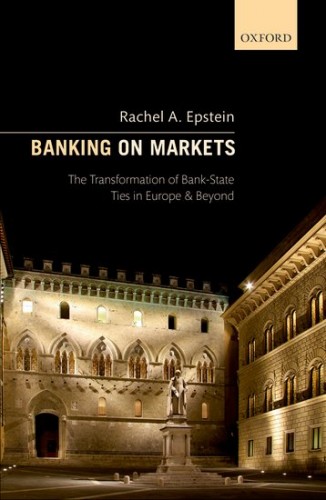 As the last decade has made amply clear, banks and states have close ties that can become very costly. States rely on banks to channel credit, pursue macroeconomic policies, win political loyalty, and project power externally. In exchange, banks can expect lenient treatment from states in the form of limited domestic competition and protection against foreign competitors, regulatory forbearance, and state guarantees. In crisis times, these ties can wreak havoc: while it is in these moments that states need banks most to stabilize the economy, banks are often at the origin of crises to begin with, and turn into states’ greatest liabilities which need to be bailed out with tax-payers’ money. Yet, states are reluctant to let go of the special relationship with their banks. Financial liberalization and capital mobility notwithstanding, banking has remained one of the most nationally controlled and protected industry. However, in Europe, important changes have been taking place in recent years, leading to the unravelling of this symbiotic relationship. Rachel Epstein’s book provides a rich account of this process through the empirical lens of two great experiments: the EU’s eastern enlargement and the creation of the Eurozone.

The EU’s eastern enlargement has ushered in a far-reaching transformation of bank ownership in the new member states. While foreign bank ownership was not a formal condition of membership, Eastern Europe’s fragile banks, social pressure from international organizations as well as considerations of efficiency all conspired to unprecedented levels of foreign bank ownership in the region. Contrary to existing literature, Epstein shows that foreign bank ownership in the East has been an asset rather than a liability during the financial crisis of 2008. Thus, despite heavy exposures of Western banks in Europe’s East, these banks have stayed put instead of “cutting their losses and running”. Epstein argues that this is because of the business model that foreign banks adopted. These banks considered their host countries as second home markets, into which they had invested too much and with too long a time horizon to just give them up. Foreign ownership also spared host countries the costs of bailing out the banks. Rather, the East European subsidiaries relied on their parent companies for providing them with liquidity during the crisis. In this context, it was hugely advantageous that Western banks entered Eastern Europe mostly through subsidiaries rather than branches. As the latter do not need to be capitalized independently, parent banks can much easier withdraw resources from branches than from subsidiaries.

While foreign bank ownership was an advantage for Europe’s East during the crisis, it is much less clear whether it also helps finance the much needed catch-up development. Traditionally, states have relied on their domestic banks to raise capital needed for development and channel it into priority sectors. In Europe’s East, foreign owned banks have not taken over that role, and the remaining domestic banks are - with very few exceptions – not capable of doing so. In three out of five countries which still had at least one major bank under domestic control, these have turned into a liability during the crisis, and, as Epstein infers, would therefore also not be able to foster development. The two exceptions are Poland and to a lesser degree Hungary, where banks have been disciplined by market forces to make them behave responsibly in the run up to the crisis, and have followed broader societal goals in their lending practices during the crisis. This “embedded discipline” is what sets these banks apart from their domestic counterparts in Latvia, Bulgaria, and Slovenia. Here, domestic banks were lending recklessly, with only their short-term profit and personal advantages in mind. In Slovenia, moreover, domestic banks became deeply embroiled in corrupt dealings with politicians.

The relative ease with which the banking crises in the East could be resolved contrasts with the experience in Western Europe, and especially the Eurozone, where banking nationalism has been prevalent. For Epstein, the severity of the Eurozone crisis is a result of contradictions stemming from an unequal liberalization of the financial sector. “It was precisely the long-standing political ties between banks and governments, in the context of liberalization in other realms, which shaped the severity and the character of Europe’s long crisis, even if European banks were not the proximate cause of the crisis.” (130). Liberalization occurred among all in the guise of capital market integration and the common currency, and it made maintaining nationally fragmented banking markets much more costly. Yet, in the run up to the crisis, West European countries were not ready to relinquish control over their banking sectors to foreign companies or supranational authority. Consequently, Western European taxpayers not only had to pay huge sums to bail out their banks, but financial fragmentation also led to bank-state doom loops, crisis contagion, compounded downturns in crisis-ridden countries, and resulted in the inability of the European Central Bank to set the cost of credit.

Epstein however sees signs of an important transformation of state-bank ties in the Eurozone, too. The creation of a European Banking Union empowers supranational authorities and market actors at the expense of nation states. Centralized supervision through the Single Supervisory Mechanism undermines existing bank-state ties, while the Single Resolution Mechanism with its bail-in principle “put market actors on the front lines of bank oversight, raises the costs of some forms of bank funding, and in effect reduced long standing implicit government subsidies for banks” (127). In addition, the evolution of the European Stability Mechanism with its direct recapitalization instrument has the capacity to directly recapitalize banks, which reduces the likelihood of bank-state doom loops. Taken together, Banking Union and the previous liberalization efforts are now tilting the balance against traditional state-bank ties in Western Europe. Epstein also shows that this is a development welcome by Europe’s multinational banks, but feared by Europe’s political leaders.

Epstein’s account of the transformation of state-bank ties ends in a cautiously optimistic tone. Even if the Banking Union has still too many holes to fully separate banks from sovereigns, Epstein argues that a replay of the Eurozone crisis as it unfolded between 2010 and 2013 is unlikely; and that the new supranational guardians of Europe’s banking system have too much to lose to allow another episode of reckless lending and overleveraging. In addition, as the marketization of bank-state ties in Western Europe also encourages more penetration of foreign banks, crises are likely to be less costly for taxpayers.

Epstein’s book breaks novel ground in bringing together episodes of state-bank transformation in Europe’s East and West. This is a significant achievement, as most literature treats the Eurozone and Eastern Europe as worlds apart. At the same time, however, Epstein treats them to some degree as worlds apart, too. This is because each chapter has its own theoretical framework and focus, contributing to different debates. In this way, the parts on Eastern Europe mostly contribute to debates on bank ownership and development, whereas the chapters on the Eurozone and Banking Union contribute to debates in European integration. While both parts are linked through the question of the relation of banks with their states, they address this question from very different perspectives. For a genuine comparative European perspective, Epstein would have to spell out her core idea of the costs and contradictions of unequal liberalization as the overall theoretical framework of the book.

While this core idea of unequal liberalization does a good job in explaining the severity of the Eurozone crisis, the story Epstein tells about Eastern Europe does not convince me that the argument travels easily to the East. In my reading of Epstein’s account, Eastern Europe “got lucky” through very unique circumstances: It was neighbouring, more advanced, small and overbanked countries, whose banks were eager to expand in severely underbanked markets. Interestingly, some of the bank expansion follows even historical imperial lines: Austrian banks mostly expanded into the former Habsburg Empire. It was only under these conditions that the second home market business model took root, and it is therefore unlikely that it will be replicated in other parts of the world (or even of Europe). While the result is indeed one of more even liberalization, it is the business model, and not liberalization per se, that accounts for the lower costs of resolving banking crises in the East. Experiences in other parts of the world, where foreign banks have not adopted the second home market model, show that foreign banks do cut their losses and run. This is, liberalization can come with high costs there, too.

Epstein could also have gone a step further in spelling out the implications of more marketized banking for Europe. While she is probably right in claiming that a repetition of the crisis as it unfolded in the Eurozone is unlikely, does this also mean that another financial crisis is unlikely to hit Europe any time soon? There are at least three reasons to think that a marketized banking system could make Europe very vulnerable to another costly financial crisis in future, and it is not clear how well Europe is prepared for this. First, in Europe’s East, foreign banks were as often at the origin of banking crises as domestic banks, despite supervision from two countries. They relied on wholesale markets, engaged in risky carry trade and reckless lending to boost their profits. And while a tighter supranational supervision and the lessons learned from the recent crisis might reduce these risky practices somewhat, should we not expect banks to try to find new loopholes to exploit? Second, the consolidation of Banking Union, and market-based banking also leads to an increasing concentration of banks, which might produce a too-big-to-fail problem of gigantic proportions next time around. Third, as Epstein herself makes very clear, states are unlikely to let go of their special relationships with their banks. Given the rising tide of “financial nationalism” we have been witnessing in the east, can we exclude that Eurozone member states will seek to wrestle back some of the control over their banks from the EU?

Another intriguing question that the book raises, but not fully explores, is under which conditions banks engage in responsible lending for development, and how such purposeful lending is affected by the marketization of state-bank ties. While Epstein mostly stresses the exceptional conditions under which domestically owned banks engage in such lending, her reasoning permits the reverse conclusion that responsible lending for development is most unlikely to occur under the conditions of marketized banking. This is because the whole purpose of marketization is about severing the ties between political entities that should – even if they often don’t - have the common good in mind. If –as envisaged in the marketized banking model, discipline is achieved at the cost of embeddedness, this bodes ill for much needed funding for Europe’s poorer regions or industries. In this way, Europe might end up with a more stable banking sector, but one which is unfit to address financial concerns of Europe’s real economy.

Overall, this is an important book, which offers a novel, rich and multi-faceted account of the transformation of the ties between states and banks in Europe. Future will tell whether these transformations are far-reaching enough to provide financial stability, survive political attacks, and generate lending for development.