Priests of Prosperity: How Central Bankers Transformed the Postcommunist World 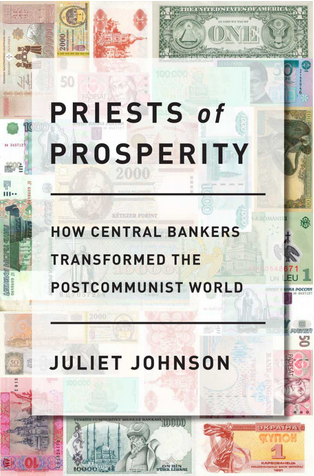 
In Priests of Prosperity, Juliet Johnson explains why every post-communist country that had emerged from the Soviet bloc had by the mid-to-late-1990s institutionalized significant levels of central bank independence (CBI). A related and equally interesting outcome was the very widespread (but certainly not uniform) commitment to price stability, which for many countries’ central banks led to learning and adopting inflation-targeting strategies. For those us of already acculturated to life in advanced industrialized economies, we may take these precepts of CBI and price stability, as well as their distributional consequences, for granted. But one lesson of Johnson’s book is that we shouldn’t—for the outcomes are highly contingent. Moreover, Johnson does a very good job of emphasizing how anomalous and important these developments were in the postcommunist world. These were, after all, formerly state-socialist monobanks in which there were no open market operations, market-based payment systems, or hard currencies with full convertibility. In many cases, state-owned enterprises and their employees depended on central bank financing well into the transition to survive. So why would anyone in these countries be willing to upend that system, confer independence on monetary authorities and forgo the electoral advantages of being able to manipulate the money supply?
Rationalist accounts for the diffusion of CBI and price stability emphasize the global competition for capital; learning and cost-benefit analysis around the ostensible advantages of minimizing inflation. Or they stress the coercive power of leading states or organizations, especially the European Union through its membership requirements for postcommunist countries. Johnson’s explanation casts serious doubt on all of these interpretations. Instead she argues, while providing very extensive evidence, that a powerful, narrow, focused and highly homogenous (and overwhelmingly male) transnational central banking community swept into the postcommunist world and embarked on an ambitious and comprehensive socialization project of those slated to become the new central bankers of the postcommunist era. As prestigious, well-funded and “successful” (remember this was before the US financial crisis and all of the European economic woes that followed) Western central bankers and officials from the International Monetary Fund (IMF) and Bank for International Settlements (BIS) were able in short order to confer status, expertise and purpose (not to mention international travel) on their postcommunist interlocutors through training and community membership. The result was that central bankers from East and West ultimately shared more intellectually and politically with one another than they often did with the rest of their own governing apparatuses at home.
The consequences of this central banking and price stability revolution were mixed. On the one hand, it was hard to both export the “optimal” model while also conveying the nuance and negotiation that should inevitably go with political independence and a price stability mandate. Thus central bank coordination with fiscal authorities has often been wanting (and therefore damaging) in postcommunist macroeconomic management. Second, the transnational central banking community overestimated at times the degree to which legal independence also embedded a preference for price stability and a willingness to cut off state-owned enterprises. Liberal assumptions (in this case held by Jeffrey Sachs) about what all reasonable people must believe were clearly belied in Russia, where legal independence was followed by hyperinflation. Finally, there was the pesky problem that CBI and price stability didn’t always deliver their promised benefits. It turns out that in small, open and wobbly economies, it isn’t the case that even the best-trained central bankers have that much control over the money supply—or over the politicians that can pretty effectively overwhelm the constraining effects of tight monetary policy with fiscal expansion. Nevertheless, Johnson makes the argument at several points in her book that it was on balance better to have the central banking community on the ground in the postcommunist world, imposing some order and limits on what was without question a volatile, disruptive, and even harrowing transition.
Beyond the extraordinary and well-documented findings in Johnson’s book around how the transnational central banking community operated during the transition and with what effects, Priests of Prosperity leaves us with at least two additional critically-important lessons. First is that when it comes to understanding trends in the global economy, social consensus, ignorance, and isolation rival or even overpower the roles of material cost-benefit calculations, incentives or objective evidence. We ignore social drivers at our peril. Second, but stemming from the first point, is that by 2012, “pre-crisis consensus strategies of monetary policy have been revealed as flawed.” These are not my words, but those of former European Central Bank chief economist Otmar Issing (quoted in Johnson, p. 227). In a sense then, it wasn’t just the postcommunist central bankers that got caught up in the prestige, power, hubris and putative “credibility” of this transnational network rooted in the West. Western bankers and advisors appeared to have been equally susceptible to groupthink (to put it much more pejoratively than Johnson ever does), which was rightly blown apart by the crisis, as Issing has testified. Going forward, while it may continue to be a good idea for transnational networks with certain kinds of experience and expertise to share with transition states what they think they know, it would also be a major improvement for such advisors to be clear about what they do not and cannot know. Next time, will we remember that there was a moment when we mistakenly thought central banking was “simple, tidy, and cozy” and then learned otherwise? Let’s hope so.