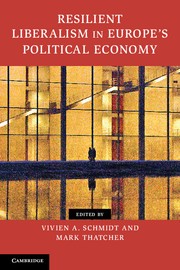 One of the more mystifying consequences of the global financial crisis is the fact that it did not bring about any real shift in economic paradigm. The Great Depression of the 1930s led to the decisive rejection of classical liberalism in favor of Keynesian demand management. The Great Inflation of the 1970s triggered the neo-liberal assault on the state and a global drive to liberalize and deregulate economies. While global panic after the fall of Lehman Brothers in September 2008 and the Great Recession that ensued fundamentally discredited the virtues of neo-liberal economics in the academy, the ideas underlying the Great Moderation prior to the crisis largely survived in policymaking, with the exception of a brief flirtation with Keynesianism in 2009. While neo-liberalism suffered a real shellacking, it patently refused to die. This was true especially in continental Europe, where neo-liberalism had always been treated as somewhat suspect, and missed the ideological zeal of a Reagan or a Thatcher. This extraordinary resilience of neo-liberal ideas in Europe’s political economy after the great crash of 2008 provides the main puzzle for Vivien Schmidt and Mark Thatcher’s superb edited volume.

In the first chapter of the book, the editors define neo-liberalism in the broadest possible terms as a core set of ideas about markets and the state: markets should be broadly free, while the state’s role in guiding those markets should be mostly limited. They then propose five lines of analysis in explaining the resilience of neo-liberalism: its ideational flexibility and mutability, the gap between neo-liberal rhetoric and reality, the appeal of its simplicity in policy discourse, the continued power of organized interests in support of neo-liberal ideas, and the constraints and opportunities offered by existing institutions. This framing chapter is worth the purchase of the book alone, given the encyclopedic treatment of the genesis and diversity of neo-liberalism as a body of ideas, as well as the analytical rigor it displays. To flesh out and unpack the resilience puzzle in empirical terms, Schmidt and Thatcher assembled an all-star team of world-class political economy scholars, and – unusually for an edited collection – kept them firmly within the analytical parameters they set for the book.

While every reader will have their preferred chapters according to their areas of interest or expertise, there are no weak contributions. All emphasize one or two lines of analysis, and masterfully run with it. In part I, Andrew Gamble traces the origins of fiscal conservatism and links it to the instinctive appeal of comparing the state’s public finances with that of a household: like a good housefather (or a Swabian Hausfrau) we need to spend within our means and tighten our belts when things get tough. The reward will come later. Vivien Schmidt and Cornelia Woll show how ‘the state’ went from the bête noire of neo-liberalism to its greatest conquest, as the rollback of the state in the 1980s gave way to its rollout in the late 1990s, underscoring the pliability of neo-liberalism and the gap between rhetoric and reality. In part II, which deals with major policy domains, Erik Jones’ chapter on the euro argues persuasively that while the Brussels-Frankfurt consensus quickly collapsed in practice, the ECB’s neo-liberal rhetoric survived even though it decisively moved away from its mandate in reality. Mark Thatcher draws mainly on the power of organized interests, which paved the way for supranational ‘neo-liberalization’ in EU product markets, while Daniel Mügge stresses how the institutional embeddedness of neo-liberal ideas in EU financial market regulation combined with the lack of any contending paradigm to preserve the neo-liberal status quo post-crisis. Part III of the book then treats the resilience of neo-liberalism in comparative perspective with excellent chapters on the UK and Ireland (resilience in the absence of growth), Sweden and Germany (resilience through policy reform), Italy and France (resilience with the help of an active state), and Central and Eastern Europe (where neo-liberalism may be the least resilient despite having been embraced most enthusiastically in the 1990s).

The book is at its most innovative when pursuing the second and third lines of analysis: the gap between neoliberal rhetoric and reality, and the simplicity of its discourse. Ironically, as the editors rightly point out, neo-liberalism as a body of ideas survives crisis after crisis because its advocates can claim that we need even more neo-liberal reform whenever things go pear shaped. Like cheerleaders for globalization, policy entrepreneurs argue that neo-liberalism is very much a work in progress. Its supporters hence can hold up a neoliberal utopia at the end of a long, tough road ahead. That is also where the simplicity of neo-liberalism’s discourse becomes important. Balanced budgets, independent central banks, wage restraint, lean bureaucracies, the virtues of competition, and clear transparent rules all have a certain intuitive appeal: these concepts can be logically explained to a 12-year-old. As we have seen, this discourse was put to very effective use during the Eurozone crisis. Even though the causes of the crisis were largely systemic – a build up of unsustainable intra-EMU macro imbalances, the lack of a common debt instrument, and a missing financial union – it is much easier to explain the crisis in terms of profligate Southern ‘sinners’ and frugal Northern ‘saints.’

If I had to imagine one criticism of this excellent book, it would be that some readers might find neo-liberalism as a whole to be defined in terms that are too broad, as it brings together German ‘social market’ ordo-liberals and Anglo-Saxon ‘laissez-faire’ neo-liberals in one big tent. Defined too narrowly, however, would be to miss the point that the resilience of neo-liberalism lies exactly in the fact that, like a chameleon, it has shown to be supple, mutable, and adaptable to new circumstances. Neo-liberal supporters are always quick to explain what went wrong pointing to the fact that we veered away from the basic principles of strong but limited states and free markets. In the final chapter, the editors remind us, however, that even elastic bands can snap when stretched too far too often, and clarify under what circumstances neo-liberalism could well be replaced by a new paradigm in the future. But while neo-liberalism may eventually die, I have no doubt that the future of Schmidt and Thatcher’s stellar volume will prove resilient, stand the test of time, and become a standard reference on most graduate political economy syllabi.