From Convergence to Crisis. Labor Markets and the Instability of the Euro 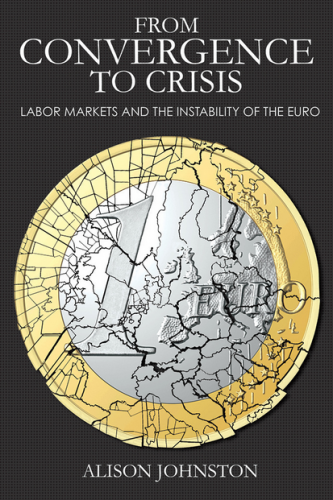 Alison Johnston (2016), From Convergence to Crisis. Labor Markets and the Instability of the Euro, Ithaca: Cornell University Press

There can hardly be a better account than Johnston’s book for anyone who looks for an institutionalist, labor-market based explanation of the euro area (EA) crisis. The argument is that the euro architecture favored a growth model in which Northern European members with their corporatist labor markets managed wage suppression that gave them a competitive edge over Southern member states. Excess current account deficits of the South fed into excess surpluses of the North. When the South then had an entirely foreseeable balance-of-payments crisis, the Northern member states forced them into austerity. They added insult to injury by blaming the Southern European governments as fiscally imprudent, locating the current account balance as the twin of permanent budget deficits. If this were to repeat itself, the euro may be doomed. Johnston argues that only if Northern member state governments would be ready to stimulate their economies, and thus generate above-average wage and price increases, will the euro area survive.

Johnston gives a secondary role to financial factors (p.175): ‘the crisis was triggered by a financial shock’ but not caused by it. The banking union is just another set of ‘supply-side solutions to the crisis’ that ‘still evade the divergence problem of the rise in external imbalances between EMU’s member states that precipitated speculative crisis in the South’. This is a plausible interpretation of the evidence. Yet, the North-Atlantic financial crisis preceded the euro area crisis. Hence, the logical implication of the labor market diagnosis is that the U.S. and the UK were also victims of German and Dutch collective wage bargains; after all, they had huge current account deficits, too. This raises the question whether there was anything predetermined in national crises: why Spain but not Italy? Why Ireland but not Belgium? It could be argued that it was precisely the way in which the EA collectively fought the crisis that left it to financial markets to pick some but not all vulnerable countries and to pursue them to destruction.

Johnston’s meticulously researched book provides a very effective antidote to the convenient and manifestly false story of the EA crisis being caused by fiscal profligacy. However, her critique of the fiscal diagnosis is not as devastating for the EU’s responses as all that. The EU shifted fairly quickly from focusing on tightening fiscal rules – which it has never since applied -- to creating a banking union. This started already in 2008 with the de Larosière report that prepared the creation of new supervisory authorities and complete harmonization of financial regulation (‘Single Rulebook’) by 2010. The EU admitted that something had to be done about the regulatory and supervisory race to the bottom which had contributed to the financial disaster in all OECD countries. In 2012 followed the decision to create a banking union, with a single supervisory authority and some (smallish) resolution capacity that came into force in 2014. The immediate reforms targeted the financial causes of the crisis as much, and in the longer term more, than the lack of fiscal buffers.

The greatest compliment for a study with a controversial argument is, however, that there is a lot to learn from it even if one does not agree with the underlying diagnosis. Johnston’s book deserves this compliment in full. First of all, it makes the reader understand why a labor market-based account of the EA crisis is so convincing to many political economists. It relies on well-researched institutions, notably collective wage bargains that can claim relevance in normal times. We do not have the equivalent knowledge of financial institutions because financial economists research elements of contracts rather than macro-institutions. The time-honoured classification of the ‘patient’ house bank system in coordinated market economies and the ‘impatient’ stock markets of the liberal market economies is too simplistic.

Secondly, Johnston’s book tells the reader what it would take for a financial-markets based account to be equally convincing. Her study identifies actors and forces that can be held responsible for the crisis. Corporatist labor markets are to blame. Johnston turns this finding astutely into an argument against neoliberal labour market reforms. The alleged rigidity of corporatist labour markets is exactly what delivers coordinated wage moderation that renders the Northern European economies so competitive. A financial market based account by contrast relies on self-fulfilling crises, contagion and amplification mechanisms that do not allow firm predictions of who will get into crisis and who is to blame for it.

Thirdly, the labor market-based diagnosis has clear policy implications. They combine a supply-side diagnosis (too high or low wage costs) with a demand-side remedy (North should spend more) that clearly addresses national policymakers and wage bargainers. This nicely ties in with the mainstream economic theory of New Keynesianism/ New Neoclassical Synthesis. The policy implications for a financial markets diagnosis cannot sustain such a national analytical focus and depends for its realization on international regulatory cooperation and supranational technocracies. Most political economists are rather sceptical of both the possibility and the desirability of either.

Last but not least, Johnston’s study is a showcase of sound and sophisticated methodology that should be read by any student in comparative political science for that reason alone. The study starts with a clear theoretical framework. It comes in the guise of a sequential bargaining game, which captures the regime change that the monetary union meant for national wage bargains and how these bargains then sustained the rising imbalances between member states. A panel analysis of all relevant countries proceeds to test predictions generated by this framework. The empirical study is completed by a pairwise comparison of countries that address specific objections to the diagnosis that divergent trends in wage competitiveness caused the EA crisis. The concluding chapter widens the perspective again and explains how the EMU favored Northern European countries so much and spelled disaster for Southern Europe with their uncoordinated wage bargains.

Johnston’s book is a major achievement that even those readers who ultimately do not agree with its diagnosis can read to great benefit. It is hard to improve upon as far as the institutionalist labor market diagnosis is concerned and hopefully inspires similar efforts in analysing financial market institutions.