An Ever More Powerful Court? The Political Constraints of Legal Integration in the European Union 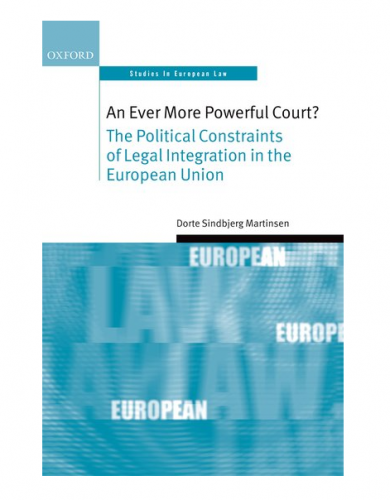 Winner of the EUSA best book award in European Studies 2015-16
This is one of the rare books in which the author admits that her in-depth research over many years made a difference to what she thought she knew. Dorte Martinsen has been a foremost contributor to the literature on judicial politics and the interaction of law and politics in the creation of a deterritorialized EU regime of welfare, in particular in the unlikely area of health care. The starting hypothesis was that the Court of Justice is a forceful, often disruptive and over-reaching actor for European welfare states. However, when Martinsen went beyond the first impact of Court rulings and traced responses to it over many years in several crucial areas, she found that member states regularly pushed back, and typically quite successfully. Member states rarely override a Court decision but “the interpretations, perceptions, and interests of political actors and governing majorities matter for judicial influence on politics. Despite fragmentation, majoritarian rule has not withered away.” (p.226)
The conclusion of the study is an antidote to a literature of which her work was an essential part. It refutes the claim that it is not really possible for politicians to counteract the Court of justice in the European Union today. Fritz Scharpf, and the many eminent researchers that followed him, had explained this ‘ever more powerful Court’ with the related hypotheses of a negative integration bias that, on the one hand, makes it easier for the EU integration machinery to remove trade barriers than to agree on protective trade regulation and, on the other, of the joint-decision trap of member states that makes it very difficult for multiple veto-players in the Council to agree on positive institution-building which changes the status quo for good. It is testament to the generosity and brilliance of a great scholar that Fritz Scharpf praises Martinsen’s book for having ‘the potential of becoming a landmark in European policy research’ even though it contradicts important conclusions in his own work.
This still left a mountain to climb for Martinsen. The mountain is to reconcile her meticulous empirical research that she has conducted over many years, supported by a small team of researchers, with the theory of the legal-political game between an independent Court and elected governments. The oxygen for the climb is provided by Joseph Weiler’s hypothesis from the early 1990s that ‘over time, EU legislators are less willing to codify jurisprudence in secondary legislation.’ (p.96) The book provides not only evidence for this hypothesis but also specifies the conditions under which codification is still likely to happen: this is the case for proposals that are less controversial and that do not touch on vastly different socio-economic conditions in the member states. The ‘judicialisation of politics’ is not destiny and becomes less so over time. This is also an important insight that may be relevant – and remains to be looked at – for welfare politics beyond the EU.
The empirical research design, based on mixed methods, is impressive on all accounts. There is first a Probit estimate of how likely it is that a policy proposal in social policy became codified in secondary law and how long it took to materialise. This is followed up with three chapters that contain structured qualitative comparisons of how legislative proposals following from Court rulings in three important areas were modified, overridden or not adopted. These case studies are of interest in their own right and comprise the regulation of working time, cross-border health care (the patients directive), and posting of workers after the Laval quartet. Primary data collection spans as long as the durée can be in the EU, namely from 1958 to 2014, and consists of primary sources (legislation, legislative proposals, court cases) as well as a considerable number of interviews with a variety of actors, conducted first in 2007, followed up in 2009, and then intensified in subsequent in-depth interviews until 2014. This is a most impressive research effort, sustained over many years, that not only settles some disputes in judicial politics but also provides raw material for other research.
This monograph not only manages to add data to a well-established field of research, but is a major contribution to our understanding of the issues involved in the highly relevant field of EU social policy - one of the largest sources of cases coming before the Court of Justice of the European Union. This will remain a book of great importance, also given how contentious trans-border social policy is likely to remain in the EU. In addition to being supported by an exemplary research design, it offers a theoretical development that will inspire other research. Given the contribution to the development of the theory, this book is a must-read for academics in political science and European studies as well as practitioners involved in EU policymaking.
Against a highly competitive set of edited books and monographs, the jury decided unanimously to award Dorte Martinsen the EUSA prize for the best book on European studies published between 2015 and 2016.