Transformations in EU Gender Equality. From Emergence to Dismantling 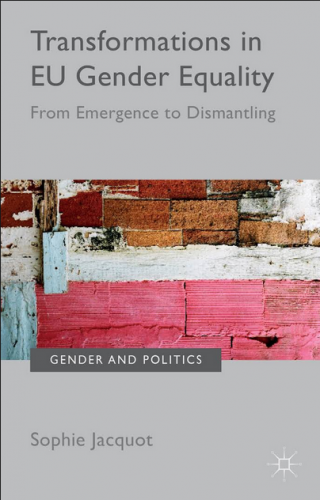 Does Social Europe have a future in the European Union? Or do we observe standstill, even regression? As regards EU gender equality policy, Sophie Jacquot, reaches the somewhat disillusioned conclusion that the European project has been contested and reversed, as the title of her monograph indicates: “Transformations in EU Gender Equality. From Emergence to Dismantling”.

Employing a historical and comparative perspective, Jacquot traces the development, institutionalisation and change of European equality policy in a “sui generis” political system. In the tradiiton of recent sociological research on Europe, she focuses on the role, actions and preferences of political actors. Her qualitative approach combines an impressive amount of empirical sources in the analysis: documents from the policy process, expert interviews over a full decade (2002/2003 and 2012/2013), and financial data from the European budget from 1974 to 2012.

Jacquot reviews in detail the history of European gender equality policy in four chapters. Except for chapter 3, they are divided into three sections on (1) legislative as well as economic policy instruments, (2) central actors, and (3) cognitive logics of the policy content. The innovative budgetary analysis, the contextualization of gender equality policy in the broader EU environment, and in particular the analysis of the self-perception of relevant actors, shows how the policy field has transformed. Jacquot suggests that it has moved from 'equality within the market' to 'equality for the market' to the present 'equality despite the market' (p. 168).

In this chapter, Sophie Jacquot does a great job in analysing the window of opportunity that was opened with Northern enlargement in the 1990s, a new Commission, the Kalanke judgement and last but not least the Women’s Conference in Beijing. This finally led to including the so-called gender mainstreaming article in the Treaty of Amsterdam. It is convincingly laid out: by zooming in into this crucial time span the chapter provides the groundwork that allows for a better understanding of EU gender equality policy after the Treaty of Amsterdam. Jacquot focuses on the gap between willingness and ability for implementation rather than on the gap between theory and practice. This contributes a lot to our understanding of gender mainstreaming as the political strategy that still guides gender equality in the EU and its member states today. The chapter would, however, have benefitted from taking into account the general turn of the EU and its member states to social policy in the 1990s as well as the impact of rising right-wing populism in Austria. Such a perspective would have been particularly interesting as the current situation in the EU – rise of right-wing populism, the debate about more Social Europe – to some extent resembles the earlier days just before gender mainstreaming was introduced and, therefore, might imply other future directions of EU gender equality policy than just dismantling.

Despite the numerous strengths of her monograph, Jacquot’s interpretations would have become more comprehensible if additional details from the existing secondary literature had been taken into account. This would have given her a longer-term perspective, make her less dependent on all the current evidence of a malaise and show in more depth the ups and downs of this policy field since the founding of the European Communities. We have been here before. Activists and researchers claimed in the 1980s the end of the supranational gender equality policy. The assessment relied to a large extent on disappointing policies in the member states and less on what was done at the supranational level. More attention to the role of individual member states is important to explain the transformations of gender equality. The regressive transformations appear as if driven by an "invisible power"; yet they can be traced back to the positions of the predominantly conservative governments that follow a restrictive understanding of gender equality. But these national practices do not figure prominently in Jacquot’s analysis of recent developments because of her supranational focus.

This book fills a real gap in the history of EU gender equality policy and provides excellent ground for further research on whether the current state of gender equality must be understood as (1) normalization in terms of EU logics, (2) dismantling of functioning structures and policies, or (3) stabilization without moving forward. The book offers an extremely informative and well-researched account of supranational gender equality policies that is highly recommended reading for researchers and practitioners alike.