Varietals of Capitalism: a Political Economy of the Changing Wine Industry 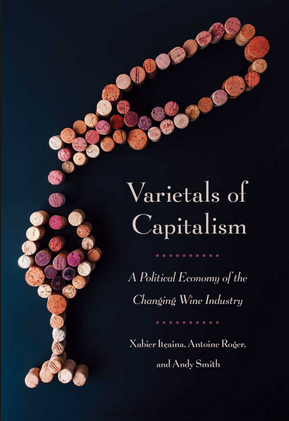 This book offers a rich and nuanced account of the negotiation and implementation of a major reform in the EU’s wine policy, adopted in 2008. Based on an impressive collection of empirical material gathered through fieldwork in Brussels and four wine-producing EU countries, the authors provide a compelling analysis of the controversies that surrounded different aspects of a major reform package. It aimed at modernizing existing vineyards and promoting European wines, which included abandoning the subsidized distillation of surpluses and introducing subsidies for grubbing out uncompetitive vines. The book will be of interest to scholars studying the wine industry, the reform of the Common Agricultural Policy, as well as the political economy of industrial policy and EU decision-making processes more broadly.

Beyond an impressive empirical account, the broader aim of the authors is to contribute “a coherent alternative analytical framework” on policy change (p. 5). Their “structured contingency” approach includes several elements that are useful in terms of thinking about policy change in a holistic way. The authors emphasize multiscalarity in their analysis, ie concurrent developments at the regional, national, European, and global levels. The analysis also employs Bourdieu’s concept of fields as partially autonomous spaces of action and the distinction between developments in the economic, bureaucratic, and scientific fields. The concept of fields combines the notions of the “field of forces”, which “is structured by the objective distribution of different types and amounts of capital”, and the “field of struggle”, which “is driven by symbolic confrontations that seek to define the most legitimate capital portfolio” (p. 38). These categories are akin to the classical political economy concepts of interests and ideas, and I would argue that any account of policy change that claims to be comprehensive should indeed include an analysis of both.

However, the theoretical framework that the book wishes to advance is explained in a language that is more complex than necessary. At least to this political economist, this economic-sociological approach has some drawbacks.

The first one concerns the authors’ antagonism: “throughout this book, institutionalist economics and its ontological twin rational choice theory have been our most obvious theoretical adversaries” (p. 229). Yet, at the empirical level, material interests seem to be relevant driving forces, for example: “In Italy, as in Spain and in France, the end of subsidized distillation resulted in significant regional contrasts. Globally speaking, distillation was rarely used in production zones dominated by appellation wines. However, southern regions used crisis distillation extensively as part of their cost/ volume strategy.” (p. 142). In other words, the wholesale rejection of “materialistic perspectives” (p. 7) at the theoretical level is not always easy to reconcile with the book’s empirical findings.

This hostility towards any academic work that is reminiscent of rational choice theory also seems to have dissuaded the authors from using concepts and insights from the existing literature on the influence of the configuration of economic interest groups and a country’s institutional framework on policy-making. There is only one passing reference to the work that inspired the book’s title: “[our] analytical framework goes considerably beyond the language of institutional complementarity that is so often used in historical institutionalism (Hall and Soskice 2001), in order to ground analysis more firmly and clearly by studying the connections between actors and institutions that are mediated within and between institutionalized relationships” (p. 36). The authors devote much space to literatures that in the end they completely reject, such as actor-network theory, but avoid using as a building block other existing work that would have been more relevant to the argument.

A strength of the book is that it sheds an interesting light on the different types of cleavages that influenced the way in which various actors from the economic field positioned themselves vis-à-vis the reform. But again, the reader finds the most interesting insights scattered in chapters 6-8, which have an empirical focus, while chapter 4, which theorises the changing structure of the economic field, does not analyse all relevant cleavages: it tells a story of structural change in the economic field that had to do with the rise of big wine trading firms and the spread of vertical integration in the wine industry. In the empirical chapters, by contrast, we are told that divisions between regions that are competitive and those that are less competitive in global markets seem to have been more relevant for the positioning of actors relative to certain aspects of the reform, such as the abolition of distillation subsidies and their replacement with marketing subsidies. Divisions between large individual firms and wine cooperatives were particularly important with regard to other aspects of the reform, especially the distribution of modernization subsidies and the regulatory reform of the categorisation of European wines.

Devoting attention to these nuances, as well as their connection to collective action problems and the positioning of different economic actors as winners or losers of the reform, would have strengthened the book. The same could be said about the question of the relative importance of the economic, bureaucratic, and scientific fields during different stages of a reform. This is addressed briefly in the conclusion with regard to the 2008 reform (p. 225) but is not discussed at the theoretical level.

Finally, while the authors show that the notion of fields as semi-autonomous loci of change has heuristic value, the concept leads them to focus almost exclusively on developments within each field, without paying much attention to possible external material and ideational drivers of change. The authors repeatedly reject the argument that the rise of New World wines, a development that was external to the European economic field, was the main driver of reform. But external drivers can also relate to broad ideational shifts that influence actors’ perceptions about the most important problems and appropriate policy instruments in the wine industry., There is little engagement in the book with ideological currents outside the wine industry that may have influenced changing orientations towards market opportunities and state intervention.

Without referring to such broader changes in the history of ideas, sometimes it becomes difficult to discern what drives changes in actors’ perceptions within fields. To give an example for the problem: chapter 5 provides an account of the way in which the reform was drafted and went through the EU legislative process. Most of what we read sounds familiar: the Wine Unit of DG AGRI was “the scribe of change” (p. 116); the Agriculture Commissioner and her cabinet intervened politically in order to shape the reform; and the Commission used its agenda-setting power in order to steer the consultative and legislative procedure towards its preferred solution. The real question is why these EU actors felt they could “improve their status both in the Commission and with administrations and interest groups considerably beyond Brussels” (p. 225) by adopting a reform with that particular content. I suspect that broader ideational changes about economic policy would be relevant for an answer.

The authors close the book with a call for “theoretical refinement and empirical expansion” (p. 231). The book largely succeeds in contributing to this agenda and would have done so even more with a less adversarial theoretical stance. The account is extremely rich and thought-provoking. More research in this vein would greatly benefit our understanding of policy change in the EU and the political economy of particular industrial sectors.