The West and the Global Power Shift: Transatlantic Relations and Global Governance 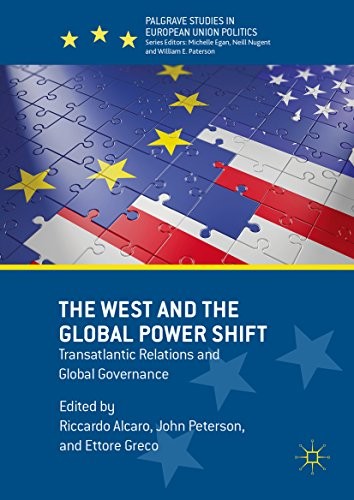 The condition of the transatlantic partnership has occupied European and American scholars for almost seventy years.  Most have concluded that the relationship has been crucial to the maintenance of security and prosperity in the Atlantic region and beyond.  In every decade, some have pointed to fissures and fractures within the partnership and predict its demise; others stress common interests and resilient institutions and are confident that it will remain strong.  Supported by a 2012 grant to 13 research and university centers in Europe, the US, and Turkey, the authors in this volume seek once again to take the temperature of this seventy-year-old patient and to assess its viability and vitality going forward. Of particular interest is the partnership’s role in managing the institutions and processes of regional and global governance.

The authors focus on what they believe to be the primary contemporary challenges to the Atlantic community, one external and one internal.  The external challenge is the perceived shift in global power pointing to a new multipolarity as the BRICS seek to dislodge Atlantic hegemony.  Internally, the partnership is challenged by economic crisis and fractured domestic politics.

The collection is divided into three parts.   The first treats the contributions of theory and history to our understanding of the transatlantic partnership.  Thomas Risse employs his tools for evaluating security communities and concludes that we are likely to see a looser transatlantic relationship, one shaped more by interest and function and less cemented by common values and identities.  However, expected change will be due less to global power rebalancing and more to isolationism and intractable internal governance issues.   John Peterson, Riccardo Alcarno, and Nathalie Tocci explore the thesis of emerging global multipolarity and its potential impact on transatlantic multilateralism.  They conclude that a global power redistribution is not easily captured by simplistic theoretical models, that power and influence vary by issue area. Transatlantic relations are therefore likely to become more decentralized and differentiated.  Multilateralism both within the Atlantic region and globally will be more complicated, requiring new strategies of leadership.  Maria Green Cowles and Michelle Egan present an excellent, concise history of the partnership, arguing that there has never been a “golden age” of Atlanticism.  Each era has presented challenges and opportunities and regional and global complexity will ensure that this mixed record continues.

The volume’s second part examines factors, domestic and systemic, that may alter the partnership.  John Peterson looks at the pattern of relations between Washington and Brussels particularly the legacy of the New Transatlantic Agenda initiated in 1995, He finds plenty of continuing cooperation even when high politics among national leaders are strained.  However, cooperation has often been haphazard and pragmatic, lacking a larger vision and strategy.  Daniel Hamilton examines contrasting impulses in the American foreign policy tradition that lead to different approaches to Europe and the Atlantic agenda.  However, such differences are hardly new.  Jolyon Howorth looks at American and European relationships with emerging powers and concludes that the American record of engagement with these states has generally been more successful while Europeans have struggled to overcome their own national differences.  Little effort has been made to coordinate transatlantic responses.

The final section looks at the role of transatlantic relations on specific issues of global governance---trade, security, human rights, and climate change.   Chad Damro offers a superb discussion of the deeply interdependent and highly institutionalized US-EU economic relationship and efforts to bolster that relationship through the NTA and the negotiation of the Transatlantic Trade and Investment Partnership (TTIP).  A successful negotiation of TTIP could provide a platform for Atlantic leadership of the reform of global economic governance following the stalemate of the Doha trade negotiations.

Alcaro discusses the potential contributions of the Atlantic partners to global security given their very different military capabilities.  The Europeans have benefitted by the western liberal security system and its multilateral institutions that rely to a greater extent on rules and norms rather than power.  Washington too has benefited from this system but is also better equipped to meet the challenges of multipolarity.  Nathalie Tocci looks at efforts on the part of transatlantic partners to gain international support for the norm of “responsibility to protect” (R2P).  The norm permits the violation of national sovereignty if the international community determines that intervention is required to protect innocent civilians.  A controversial application of the norm in Libya has made it more difficult to apply in Syria.  Christine Bakker and Francesco Francioni recount the mixed and often contentious record of addressing climate change in the US and the EU.  Coordinating an Atlantic response has been particularly difficult.  In sum, the recent record of the partnership’s contribution to successful global governance on this range of issues is mixed at best.

Alcaro and Greco conclude that the transatlantic relationship is nothing if not resilient.  The partnership has always been fraught with conflict and disagreement but a foundation of shared interests, common values, and malleable institutions have led generations of leaders to conclude that remaining together is preferable to going it alone.  There is evidence that the bonds that have held the partners together may be weakening but the weakness stems more from internal or domestic disagreement than from external challenges.  To predict the future it is more useful to understand the vagaries of domestic politics than to speculate about shifts in global power balances.

This volume went to press prior to the Brexit referendum or the unexpected election of Donald Trump in the United States.  Both developments may well offer new challenges to the transatlantic relationship.  Both events underline the need to keep an eye on domestic political developments, perhaps the central lesson of this very useful volume.