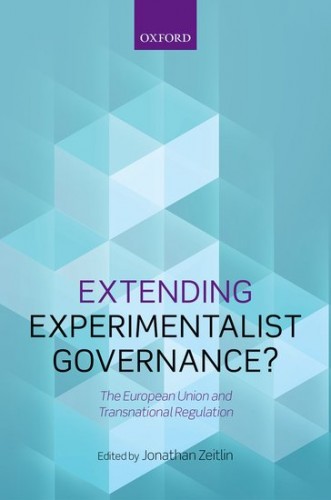 Jonathan Zeitlin’s new edited volume is ambitious to say the least. Having established the concept of ‘experimental governance’ in previous work, and the argument that experimental governance (EG) has come to characterize much of the EU’s policy architecture - a claim made most notably in Experimental Governance in the European Union (2010), edited with Charles Sabel - in this study Zeitlin and his contributors take on a number of questions regarding the role of the EU in extending EG to the international realm. Given much disagreement as to whether EG, as defined by Sabel and Zeitlin, is pervasive even within the EU (see Eckert and Börzel 2012), does the book live up to its ambitions?

In fact, the success of the book lies largely with the cautious approach to analyzing governance in multiple transnational policy arenas adopted by most of the contributors. For that reason alone it is worth reading, even by EG-skeptics. Given the normative thrust of much other work on this topic - as Sabel and Zeitlin (2012: 420) profess, “Our conviction [is] that representative democracy today cannot simply be extended but needs to be reconceived” along experimentalist lines – I was concerned that ideational convictions and empirical analysis would be closely intertwined, creating implicit or explicit bias. Rather than consider EG a rarely achieved ideal-type policy system, it is often presented by its advocates as not only normatively superior to other forms of governance (or even democracy!) but as ineluctable and predestined.

This fear was reinforced by Zeitlin’s introduction which sets out, in somewhat less than objective terms, a series of assumptions and observations rather than hypotheses. Thus, he states on page one: “Across a wide and expanding range of policy domains, the EU has developed over the past 15 years a new architecture of experimentalist governance” (many would dispute that); “through a variety of institutional channels and mechanisms, the EU is actively seeking to extend its own internal rules, norms and standards and governance processes beyond the Union’s borders to third countries and the wider world” (others might agree, but would not frame that phenomenon in EG terms); and “in a number of issue areas, experimentalist regimes with similar architectural features to those within the EU appear to be developing on a global or transnational scale” (possibly – assuming that the previous observations are demonstrably correct).

Zeitlin’s authors actually do a very good job of systematically analyzing whether EG can be found or not. It is worth noting that for EG to exist, according to Zeitlin, they would need to detect the following combination of “salient virtues” (pp. 10-11): the accommodation of diversity in adapting general goals to varied local contexts; the creation of a mechanism for “coordinated learning from local experimentation through disciplined comparison of different approaches”; and a process of iterative and recursive revision of policy goals. What do the authors find?

Dąbrowska-Kłosińska on the EU and the transnational regulation of GMOs finds lots of examples of experimentalism alongside conventional interest-driven conflict and bargaining, but finds it hard to assess the true significance of EG in the context of complex networking and clear policy disagreements at all levels.

Biedenkopf on EU chemicals regulation makes a heavily qualified statement that the EU’s REACH regulation (Registration, Evaluation, Authorization and Restriction of Chemicals) has some EG elements, but concludes that it is not a pure case of EG.

Overdevest and Zeitlin argue that the EU’s Forest Law Enforcement Governance and Trade initiative is among the most clearly experimentalist of the EU’s external policies. But they go on to admit that in practice it is hard to distinguish the actual interaction between the EU and third countries from political pressure via standard trade policy. They speak instead of “contingent unilateralism”, which is evidently not EG.

Weimer and Vos argue along similar lines regarding the EU’s role in the transnational regulation of food safety. While they note some EG in the relationship between EU and third country actors, power differentials heavily favor the EU and mute EG in practice.

Monar on the external dimension of the EU’s Area of Freedom, Security and Justice argues that “governance in the area is a patchwork of governance modes based on pragmatism and political expediency” (p. 249).

Svetiev hedges her discussion of the extent of EG in transnational competition policy with lots of ‘potentials’ and ‘possibilities’, concluding that “the question remains whether (…) within the settings examined in this contribution and beyond there [are] mechanisms that display a complete experimentalist architecture” (p. 195).

De Búrca on the EU and the UN disability convention posits that if there is EG at work, it was not uploaded by the EU which instead promoted its own self-interest.

Posner argues that EG does not exist in international financial regulatory cooperation because the combination of special circumstances that may make EG possible in the EU is absent. In a remark that could be applied to the volume as a whole, he argues that “It is one thing for a regulatory architecture to appear experimentalist in form and quite another for it to function in accordance with the expectations and normative preferences of experimentalist theories” (p. 216).

The overall impression left by these studies is that transnational governance (as one would expect) is even messier than the EU, a policy system which most would agree combines cooperation with unilateralism and hierarchy with polyarchy, with strong doses of contestation, power differentials and ad hocery added to the mix. Contra Sabel and Zeitlin, only rarely, and very imperfectly, does one find a regulatory architecture even in the EU that begins to approximate EG in practice. To be fair, in his ample and detailed conclusion, Zeitlin does seek to import the nuances and negative findings of his contributors into his general assessment. But he cannot avoid cherry-picking those details that most favor his own expectations and normative preferences, or putting a gloss on, or sometimes (as with Posner) arguing against his authors’ often skeptical conclusions. Using an “EG lens” to study governance apparently risks viewing the world through rose-colored glasses.