Which European Union? Europe after the Euro Crisis 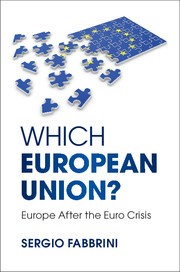 Sergio Fabbrini’s latest book, Which European Union? is an insightful reflection on the current EU’s poly-crisis. It shows that the euro crisis has strengthened the institutional deadlocks of the European Union and it also provides ideas on how to minimize the consequences of the tensions that have arisen.

Fabbrini asserts that the EU has dramatically changed with the euro crisis. The book not only evaluates these changes, but also addresses the EU’s intrinsic political legitimacy issues in the light of the composite nature of the EU. Fabbrini offers a sharp comparative political analysis grounded in the literature on models of democracy. This framework gives an original perspective on both the history and the foreseeable developments of European integration; it allows analysing the structural causes of the current institutional and political crisis the EU is facing.

The principle with which Fabbrini starts and ends is that the EU must be thought of as a union of states (or as he calls it, a “compound union”) in which the states view the EU in different ways. The United Kingdom has seen European integration as a way to expand the common market with very low capacity-building at the European level; another view currently endorsed in southern European countries, such as Spain and Italy, and previously maintained by Germany, considers the EU as a federation-to-be. A last perspective, mainly supported in France, has favoured intergovernmental bargaining. According to Fabbrini, these view cannot be reconciled but must instead be connected.

The book is organised as follows. Part one reinterprets in an original fashion the history of European integration and focuses on the institutionalisation of multiple unions. Adopting a historical-institutionalist perspective, Fabbrini analyses the multidimensional institutionalization of the EU from the Rome to the Lisbon Treaty and up to the euro crisis. The author naturally gives prominence to the Maastricht Treaty because it created a crucial distinction between different decision-making regimes for dealing with different policy issues. While the Treaty strengthened the Community method in the field of single market policies, it also fostered the legitimacy of intergovernmental compromises and eased opt-outs. Fifteen years later, the Lisbon treaty created a “dual constitution”, one intergovernmental and the other supranational. The euro crisis substantially altered the constitutional equilibrium formalized in the Lisbon Treaty because of new intergovernmental treaties and inter-states pacts. This divided nature of the EU’s constitutional arrangement can hardly cope with the increasing gap between member states and citizens’ views of national sovereignty. The EU has become unable to address member states’ and citizens’ needs.

Part two of the book identifies and criticizes the three main competing conceptions of EU integration: economic community, intergovernmental union and parliamentary union. Fabbrini argues that these perspectives are based upon weak analytical frameworks. Firstly, the comparison between the EU and the most significant regional economic organizations highlights the unique character of the EU. Supranational regulation of the common market is incompatible with “Europe à la carte” that an economic community would allow in terms of policy integration. The exclusion of the European Parliament from the main decisions over economic policy raises concern regarding political representation at the EU level because the EP would represent all EU citizens, not only those of the Eurozone. Such discrepancies make it inadequate to describe the EU as an economic community. Secondly, the euro crisis has proven the intergovernmentalist route to be neither efficient nor legitimate.

Intergovernmentalism cannot sustain voluntary coordination necessary to resolve the euro crisis. It has strengthened the power of a few larger member states (especially Germany) to the detriment of the others. The intergovernmental perspective is also at odds with the development of the EMU as a centralized, technocratic and judicialized policy regime. However and thirdly, Fabbrini shows that Parliamentarism cannot be an answer to the shortcomings of an intergovernmental union either. Taking the German and Canadian genetic, institutional and structural conditions of democratic parliamentary federation seriously, the author explains why the conditions allowing a parliamentary union to make the EU more effective and legitimate cannot be met. The main problem that Fabbrini identifies in this part is that these three perspectives favour specific types of legitimacy but cannot give room to both main sources of legitimacy: the citizens and the state.

Finally, part three presents the compound union perspective that aims to fill the gap of the shortcomings previously analysed. Comparing the different democratic models adopted by nation states, Fabbrini builds on Lijphart’s classical distinction between competitive and consensus democracy and argues that a union of states relies on compound democracy. Nation states display a political process that depends on partisan divisions (social structure) and on “a locus of the last decision” (governmental structure) (p. 189). Fabbrini bases his argument on a thorough study of the USA and Switzerland to analyse how federalization works by aggregating previously independent states or cantons. The author then proceeds to analyse the systemic foundations, the constitutional frameworks and the institutional structures of compound unions. Fabbrini thus proposes a pluralist institutional order.
Toward a compound Union?

Since the EU is closer to a confederation than to a nation state, the book shows the inadequacy of interpreting it on the basis of the statist approach to federalism that continues to be the predominant view in Europe. Fabbrini provides a thorough comparative analysis of “compound unions”, especially between the EU and two unions of states – the USA and Switzerland. The two systems are the only cases of union states combining vertical (between the centre and the federal states in the USA or cantons in Switzerland) and horizontal (between the executive and legislative institutions of the federal centre) separation of power.
This comparison supports the claim that the EU is currently lacking an agreed constitutional document that would regulate and resolve interstate and sectional potential conflicts. Fabbrini argues that Parliamentarism cannot be an answer to the demographic asymmetries between member states and the national differentiation between their citizens. Parliamentarianism at the European level is thus not viable for structural reasons, rather than for merely contingent reasons. Fabbrini proposes institutional reform of the EU, that has several elements: measures to distinguish euro and non-euro member states membership, measures to reformulate the principle of the separation of power, and measures to reconnect different unions that exist anyway.

Fabbrini identifies two ways of dealing with the current institutional tensions. First, the strategy of policy differentiation would call for institutionalizing an EU based on concentric circles with different clusters of member states. Such a strategy has weaknesses, especially because it does not solve the structural legitimacy deficit of the intergovernmental perspective. But, it would give rise to a unitary but internally differentiated organization. Second, a comprehensive treaty reform is required, not least for the institutional differentiation strategy. The reform would both define the constitutional frame of a euro-area and the regulatory fame of an inclusive single-market. With such a strategy, the EU would be “an intersection of several treaties, with their multiple opportunities and obligations, not a club to enlist in or to leave” (p; 271). This reformed union would take into account the EU’s historical critical junctures, of which the euro crisis is one.

While the intergovernmental perspective would remain an essential feature of a union of states, Fabbrini argues that intergovernmental institutions must interact with supranationalism. The single market could rely on a reformed – and simplified – version of the Lisbon Treaty, but euro member states should be organized into an original model of compound union. Such a union would, according to the author, be the result of a political compact rather than of an internal evolution or external pressure.

Fabbrini’s book goes beyond commonly asserted solutions to make the EU more legitimate and more efficient. The author not only revises the most commonly accepted analyses of the EU’s institutional framework and political regime, but also provides analytically grounded solutions to solve the historic dilemmas of European integration.1 The author pleads for increasing the capacity of the EU as a “compound union”. It would reconcile member states’ distinctive views of integration and provide a compromise between the two main sources of political legitimacy, the citizens and the states. Multiple unions already coexist and could be differentiated within a common framework. Such a recomposition of the EU’s institutional system should allow different parts of the system (the centre and its components) to be politically and democratically legitimate.

Despite Fabbrini’s insights into the dilemmas of democracy and institutional reform at the EU level, the reader is left with some important questions. What if the EU is structurally wedded to its dilemmas and unable to include its citizens in a real democratic process? How can institutional shortcomings be overcome given the absence of a consensus between member states? The prospects for the exercise of political leadership that could align member states’ preferences and strike a political deal are poor or even zero, considering the weak support from European citizens and elites. Even if everybody agrees that institutional reform since the euro crisis is urgent and given the insights of Fabbrini and others, it is not clear how such a political consensus could come about.

Even so, Which European Union? is an important and much needed book. It reminds policy-makers that they need to differentiate between member states only interested in market cooperation and member states advancing towards a deeper economic and monetary union while these two types of members also need to be connected. In light of the British vote to leave the EU, this is a prescient and timely message.

1 Among which are the veto dilemma (which tends to neutralize the unanimous consent required in the decision-making process), the enforcement and compliance dilemmas, or the legitimacy dilemma.